jeff loaded the bisque kiln yesterday and since i wasn't working real estate today i fired it off.  the good thing about firing one of the kilns is that you need to stay at the studio and tend to it.  albeit the bisque doesn't need the tending that the gas kiln does, but i still like to be there while it's firing.  never totally trust a kiln sitter ('specially mine, because it isn't working right now!).
after the last trip to seagrove, nc and being totally amazed at the huge pots i saw i decided to throw some larger pots.  typically i make smallish work.  throwing 5-6lbs of clay is a lot for me.  i made some planters and some vases... not sure what i will keep. 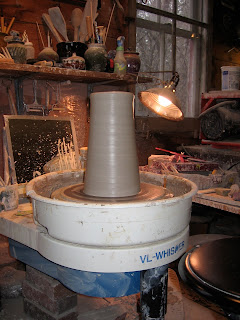 this cylinder was about a foot tall...

when i was done throwing i got busy assembling some piggy banks.  john taught me how to make pigs a few years back.  if you scroll to the bottom of the blog you will see a pic of a finished pig with shino glaze.  john made lots of pigs.  he always sold as many as he made.  john told me the story of how he met gary rith while they were both working shop at the fair at the league of nh craftsmen's annual show at mt. sunapee... they both made pigs and they both had their own style.  john thought gary was a cool guy who made great pots with a sense of humor.
below are the pigs i assembled today... 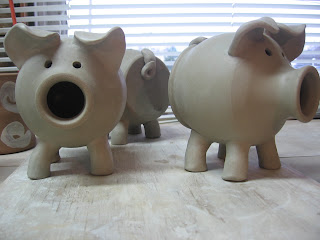