yesterday i had to report for jury duty bright and early in the morning.  there was only one case being heard this week and it was going to be a long one that was predicted to last two weeks!  i was relieved not to be chosen for this jury.  as i mentioned a few days ago, jeff and i have decided we are moving to seagrove, nc and i really need to start organizing and packing.  we will be leaving new hampshire at the end of may!
...and you are probably wondering what this has to do with pizza... since i was home early and jeff was heading to salmon falls pottery in dover to throw production pots, i said that i would cook.  i gave jeff two choices... emeril's recipe for mac & cheese OR pizza.  he said he would get back to me when decidided.  he couldn't think about dinner right then because the oreos he ate for breakfast were not agreeing with him ;-).
later he called and said pizza was his choice... and how about making dough at home rather than buying it at the grocery store?  i thought it was great idea because i could get the dough going early and i would be home most of the day sorting and packing.
i decided to do an internet search for a good dough recipe and also posted on facebook hoping that SOMEONE, who makes lots of pizza would share their recipe (but SOMEONE wasn't willing to share their secret!)
i found two recipes online and sort of combined them into one... in turned out yummy and i had lots of fun making them. 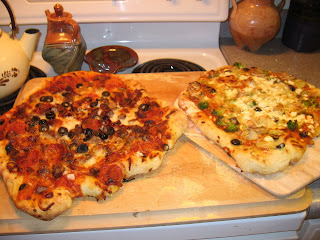 on the left is bacon, sausage, pepperoni, onion & black olives and the right is broccoli, mushrooms, onions, artichokes, garlic, black olives and feta cheese.
we both agreed that the next dough we will try a little more yeast.  jeff thinks we should try adding a little molasses instead of sugar (i only added about a teaspoon of white sugar) i think molasses would be too weird in pizza... anyone have thought on that or tried it before?
at April 27, 2010