I grew up in a French speaking home, yet never learned to speak the language... I was the headstrong baby and thought my family should stick to English.  During dinner, when the conversation switched to French, I was certain everyone was talking about me... I am quite sure I was right!!! I would cover my ears so I didn't have to hear all that babble. My mother said that someday I would regret not learning the language and she is right, as mothers always are.
That little tidbit of info brings me to the subject of this post...

It wouldn't be Christmas for me without French Canadian Pork Pie (tourtière). My mother always made a bunch of them for the holidays. Many times she served them as a late supper on Christmas day. After we kids were all grown and gone, she would have a day after Christmas lunch that included pork pies. There was always extra for any of us who wanted to take one home. Over the years there were alway spouses or significant others who weren't as excited about them as we were... I guess if you didn't grow up in a French Canadian home, this combination of spices may not be appealing.

I won't be in NH for the holidays this year so last night I made a pork pie. I thought I would share the recipe with you... 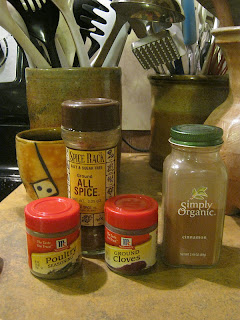 these are the spices you will need
1 tsp. all spice
1 tsp. cinnamon
1/4 tsp. ground cloves
poultry seasoning - I didn't measure, I just shook a bunch in!
salt and pepper, again no measuring :-)

You will also need two 9" pie crusts... make your own or buy the Pillsbury pre-made, which in a pinch aren't bad! 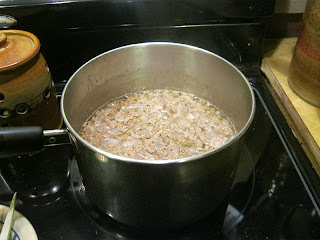 In a saucepan combine 1 to 1.5 pounds of ground pork, 1 medium onion, chopped, the seasonings and about 3 cups of water. Simmer softly until all the liquid is gone - can take up to 2 hours. When the pork was cooked but there was still water I took a taste and added a little more seasonings... I like my pie on the spicy side. This looks really ugly but your home will smell fabulous as it simmers!!!

While that is simmering... 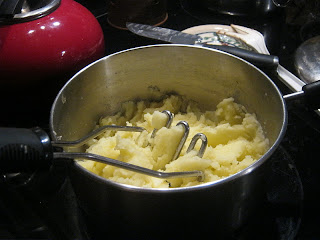 Peel, cut and boil 2 medium potatoes - drain and mash. Again, the potato ratio is adjusted for preference. When the water is gone from the meat add the mashed potatoes and mix well.

Line a 9" pie plate with dough and spoon in the meat filling, cover with the other dough and cut slits into the top. Bake at 350 degrees in the center of oven for about 45 minutes. 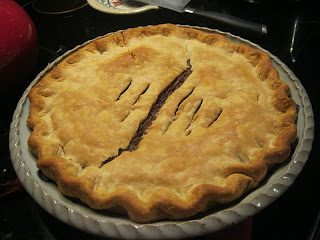 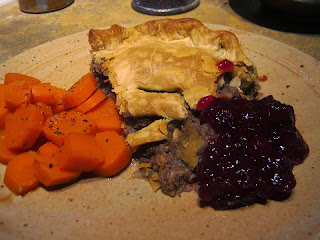 Cranberry sauce is really good with the pie... vegetables are often whatever was leftover from the big Christmas dinner or a salad. My Dad likes to have green olives with his and many of us like a little ketchup on top... it seems people of Canadian descent really like their ketchup!