The Race To The Finish Line

We have three deadlines to meet. Etsy orders to ship on Friday, Pottery for the Piedmont Craftsmen's show next week, as well as the local Celebration of Seagrove Potters show. We unloaded a bisque in the gas kiln and started glazing on Sunday, while we had another bisque load firing in our neighbors electric kiln. Since the move we have not wired our electric kiln. It may be time to get that done, although it won't be as easy as one would think, but that's a whole other blog post. 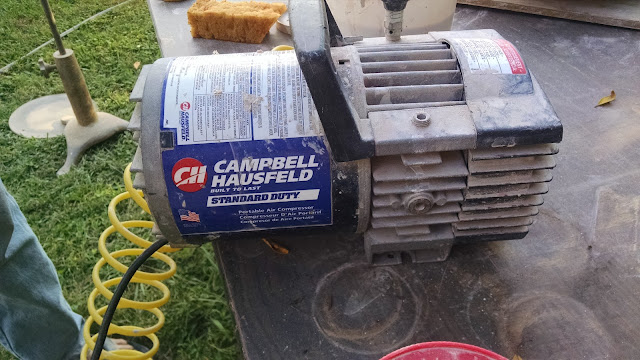 We had a lot of pots that needed to be sprayed with ash glaze. In reality, all the pots for Piedmont Craftsmen had to be sprayed. Jeff got started on some and I took over mid-afternoon. When I flipped the switch on the compressor it made some very strange noises and didn't produce any air. Thinking it had run too long, I shut it down and gave it a rest. Twenty minutes later and still nothing.

Jeff had to leave in two hours to do the evening shift at David Stuempfle's wood kiln.
The next day we would have another load of pots that would need spraying.
Thankfully, there is a Harbor Freight in nearby Asheboro! 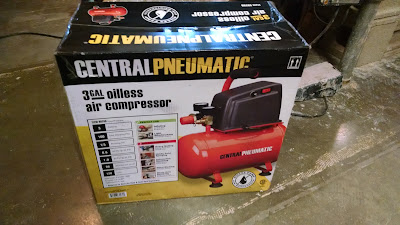 It's a step up from the very old one and on sale, was under $60. While I was gone, Jeff took the old one apart and put it back together.

It's been working fine ever since.