put the lime in the coconut...

last week jeff and i spent new year's day visiting my brother and his girlfriend at their new home in New Ipswich, NH.  it is a very quaint antique cape with a workshop, horse barn and green house... it is absolutely perfect for them. 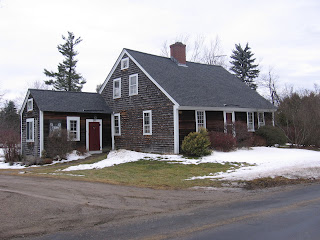 shortly after we arrived my brother said to me... "did you hear that Diane Nilsson was the owner of this house before us?"  my reaction was "oh my god... did you know she ran over my dog when i was living in Wilton?".
Diane was once married to singer/songwriter Harry Nilsson who is best known for that song in the 70's "coconut".  during the 90's when i was living in Wilton, NH she lived down the road from us... i was running with my dog Misty who got away from me, crossed the road and ran directly in front of Diane's car.  the dog survived with some minor leg injuries and it was always a good story that Misty had been run over by Harry Nilsson's ex-wife.  i knew that she put her house in Wilton on the market in the late 90's but i didn't know where she went... i guess i assumed back to california where she had come from.  she had moved to Wilton so that her children could attend High Mowing, a private Waldorf school in town. she must have liked NH and decided to move to neighboring New Ipswich.
unfortunately Diane died a little over a year ago and my brother purchased the home from her estate.  back in november jeff and i watched a netflix documentary about Nilsson and Diane was in it... of course that is when jeff heard about the whole dog incident.
sort of a strange story to start the new year... and it has absolutely nothing to do with making pots.