despite the fact that it has been raining since the day after we arrived in NH, we have enjoyed spending time with family and friends. on saturday we did get to Lacoste Gallery in Concord, MA for the opening reception of the Don Reitz exhibition. it was very inspiring and Don did give a short talk. my favorite part of his talk was at the end when he used my favorite Joseph Campbell quote... "follow your bliss", it really works. Reitz has been using a lot of color in his work and there were some wonderful platter forms with awesome feet that were hung on the wall. i was very drawn to those and probably because i have experimented with a similar form in raku some years back. perhaps i will revisit that shape in the next few months.
monday was spent with my daughter... we enjoyed a fun day that included a martini lunch. i took Meredith's advice and had lobster! the yummy part is that it was mac & cheese with lobster... perfect for a rainy day.
a trip to NH always includes a stop at the liquor store. liquor is cheap here compared to NC... almost HALF the cost. so of course you have to stock up. while i was at the register they had these little guys on the counter... they made me think of Gary so i couldn't resist buying one... 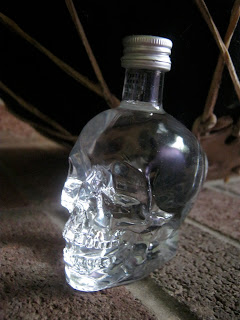 skull head vodka!!! how cool is that?
today it's back to work. we will start to pack the bus with the contents of the storage unit... oh and to top things off... the starter in the bus was giving us trouble so my brother in law Steve is going to replace it today. of course nothing is cheap to fix on something that big! he started to work on it yesterday but it was getting late and the rain was pouring down.
it's still raining today - jeff said that it's raining and cold so that we will be reminded why we love living in North Carolina!
... lastly i want to congratulate my potter friend Paul Haigh.  as of yesterday he is a state juried member of the League of NH Craftsmen!
at May 18, 2011