Here it is the 10th of December and this is my first post of the month. Life and work have been crazy. Isn't that always the way? The crazies just can't come one at a time.

Let me start with life.

My 90 year old Dad put his name in at a Catholic nursing home last year. He had visited a few places and said if he had to go to a home, this was the only one he would want to be in. The week before Thanksgiving he got the call that they had a room for him. It was such a big decision for him to give up his apartment, and in the end he decided he was ready. He had been relying on meals on wheels and frozen dinners because he didn't want to clean up. My sister was going every Saturday and cooked a big meal with leftovers for the next day. She also brought him grocery shopping, to the library, and the bank. Dad was dependent on the "Hand-in-Hand Van" to pick him up every other week to have his blood work done. The van lost it's funding in October (Make a America Great Again - yeah right!) and he was going to have to ask my uncle to drive him or take a cab back and forth.

The call came at the right time.

My sister Anita and I have spent countless hours on the phone or texting back and forth about making this transition as smooth as possible for both Dad and her. Most of the labor fell on her. There was no way that I could get away during this time of year.


Last Thursday was his move in day. He seemed to settle in quite well and was exhausted when I spoke to him at the end of the day. He slept well that first night... that is until he got up at 5:30 am and on his way to the bathroom fell and hit his head on the dresser! The nurses came right way and he was off to the hospital in no time. He was fine. No concussion and no stitches needed. He told his nurse that he wanted to make a big impression on his first day at the home. At least he hasn't lost his sense of humor!

As for work... this is definitely our busiest time of the year. My goal this year was to hit 1000 total sales on Etsy and I met that goal and then some! I should be dreaming of piggy banks every night but I think I have been too tired to even do that!

Here is a sampling of piggy banks from last week's firing. I am really happy with how the "bull" piggy bank came out! This week we will fire again. I have about 26 more piggy banks and salt pigs to ship by the December 20th deadline. I will get a little break next weekend when my girl Danielle arrives. While the kiln is cooling we are headed to Asheville and a candlelight tour of the Biltmore Estate. I am so looking forward to it! 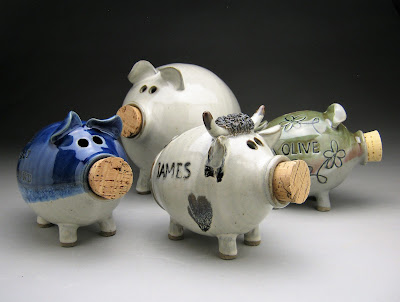