Re-Cap of the Fair

I have blogged about the fun adventures, and misadventures that we had on our trip to New England, but I haven't said much about our time at the League of NH Craftsmen's Fair. 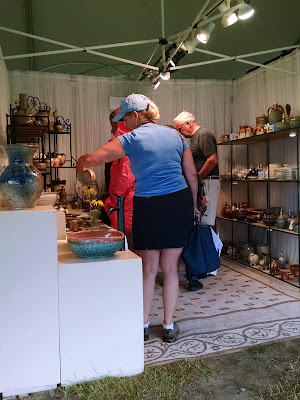 Overall it was a good event. Our sales were a little ahead of last year. Jeff and I both had family and friends visit us at the fair. They were people that we would not have been able to connect with if it wasn't for them coming to the show. 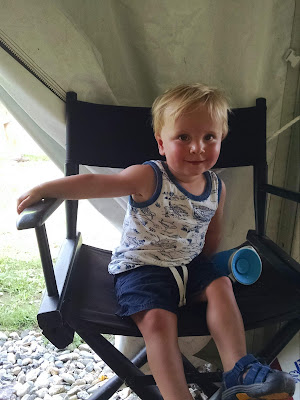 One of my favorite visitors was my great nephew Weston, who also came along with his mother, my brother's oldest daughter Brooke. He is a very active and expressive 1 1/2 year old! Our booth was across from the upper lodge of the ski area and we were able to have lunch together on the patio. 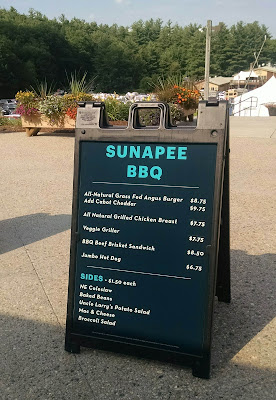 Jeff and I always laugh that to many in NH, hamburgers and hot dogs are called barbecue. They did at least have a brisket sandwich on the menu. The food is actually quite good. We typically bring our own lunch everyday and treat ourselves to either one breakfast or lunch during our time there.

Getting to the show this year was a struggle. We had so much going on at home that we hated to leave. The day before we left we unloaded a kiln and had to pack and ship most of it's contents. We also knew that leaving was going to put us a little behind in production for the next round of orders that are due at the beginning of September.

Then there was the garden. Jeff worked so hard all Spring and Summer, and we knew that a lot of the veggies would  be ripe for picking while we were gone.

All of these things, along with some changes to the show and management, helped us make the decision that we are definitely not doing the show next year. We need a break... and it might be permanent. We actually sold our booth rug to another booth holder that was moving into the show on the night we were packing up! There had been a lot of rain and their space was muddy and they didn't have a rug. Problem solved... they were happy and we didn't have to pack it up.

This year the attendance at the fair was down most every day. Could it be because the gate fee was increased to $15? I think it definitely had an affect. At $15 you don't even get to come for two days. A second day is an additional $5. This is a big show and it really takes two days if you want to see and do everything. There also were some "guest" craftsmen that were not juried members. That totally blew my mind since I lost my juried member status when we moved. Jeff was grandfathered in. I am no longer eligible to participate as a booth holder. We take Jeff's work to the show. I am allowed to help with a percentage of it's creation. There were also rumors that the booth fees will increase next year. Our booth fee is around $800 for four days. A nine day booth, I believe is close to $1600. This is for a 10' space. Corners and large booths are more.

It's a little scary to stop doing a show that has become part of your life for so many years. We have had good sales the last three years, but many years of poor to mediocre sales as well. I guess I would rather go out on a high note. Next year we will take some time, perhaps in the Fall, and take a road trip to visit our family and friends... and we won't have to pull a trailer, YAY!