We Have The Power... 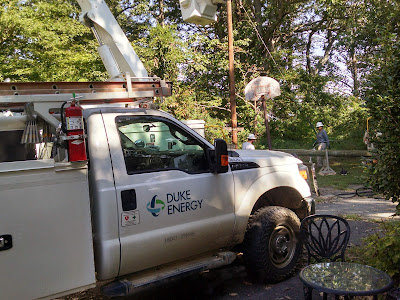 In between the two hurricanes, Duke Energy came out to our house and installed a transformer at the top of our driveway. The new transformer also meant replacing the utility pole. We have been working on getting this done since August. This house has had a lot weird electrical issues since we bought it in 2015. The lights would dim whenever the heat pump came on and the LED track lighting in the kitchen would barely glow if the toaster oven was running. Turn the microwave on at the same time and the microwave turntable slowed to a crawl and nothing heated up. If I was cooking dinner at night, toaster oven on, lights on, AC running, and Jeff was still working in the studio... his wheel would slow to a crawl!  Our electrician couldn't find anything wrong in the house so we finally called Duke. They sent an engineer out to assess the situation and he determined that the transformer at the end of our long driveway was too far from the house and undersized for the amount of electricity that today's homes require. The fix was putting in this new transformer. 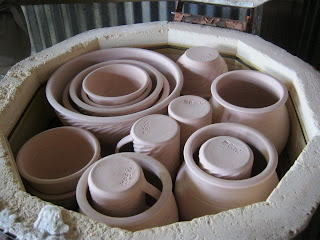 For the last three years we have been firing to bisque in the gas kiln. First we ran out of money to have the electric kiln wired. Second, after living here a bit, we realized we may not have enough power to run the electric kiln... unless we turned everything off in the whole house. While there is nothing wrong with firing the bisque in the gas kiln, it is more work to load. Then there is the time factor. We can be firing a bisque while the gas kiln is firing. Glaze the pots and have them ready for back to back glaze firings. When there are orders to fill it is much more efficient. Lately it seems we are struggling to get things out on time. Fingers crossed that it all works out!