i am wiped out tonight.  i spent most of the day at the studio... the first part of the day was spent getting more of the gas kiln loaded.  the second part of the day was spent removing any lettering that referenced "school bus" on our bus as well as any reference to massachusetts since that is where it came from... we new hampshire people don't want to be driving down the highway and have people thinking we are "massholes"! oh...did i really just say that???  wasn't a very nice thing to say was it?  i apologize to any of my mass friends & readers... of course there are lots of  nice people in massachusetts... and some of them might even be good drivers.

removing the lettering involved a hairdryer, a scraper and peeling with fingers... those fingers now look like they have taken a beating... good thing i am NOT the long painted fingernails type of girl.  the only nails that get painted here are toenails! 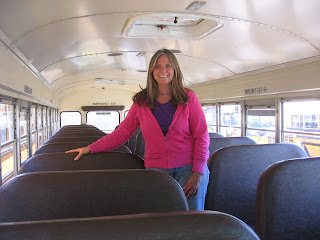 jeff has already started to take the seats out... we are leaving two rows in the bus to make traveling a little more comfy. 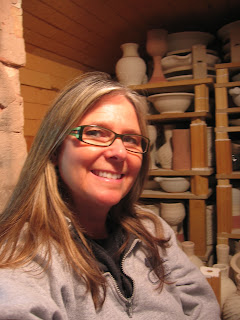 self-portrait of ME with the kiln a little more than half loaded
just was thinking... i should have my daughter come and help with getting the letters off of this bus... when she turned 2 i bought her a lil' big wheel for her birthday... it was pink and when i assembled it i spent forever putting on all these cutesy stickers.  as soon as she got the big wheel she proceeded to peel ALL of the stickers off of it... in a matter of minutes!  i wonder if she would come and peel stickers off of a giant bus...
at May 11, 2010