for the love of studio potter...

i fell in love with studio potter when john and i first started seeing each other.  he had what seemed like a gazillion issues and was only missing a few from it's inception.  before he went back to potting full time he had a day job that meant leaving for work at 6:00 am... if i was staying at his place mid-week, i would roll out of bed and sit in his sunny kitchen with coffee, toast and peanut butter... devouring old issues of studio potter.  i loved reading gerry williams' stories of potters from around the country.
today i unpacked a box that had an assortment of john's books in it.  books that had been in storage in maryland and had ended up at bill van gilders.  bill returned the box to john a few years ago and the only thing we took out of it was bernard leach's "a potters book" and put the rest of the box in a closet.  inside the box when i opened it was a studio potter that i had not read!  it was the june issue from 1985... the potters that were featured were from the blue ridge mountains... one of the potters in the story is bruce gholson who is also a seagrove potter now. how timely that i unpacked it now!  on the cover is actor joe spano whose wife was (or is) a potter. 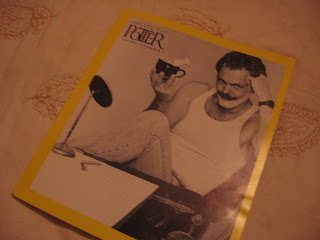