since so many glazes were running low i spent a day and a half mixing new batches. i don't mind measuring, sieving and stirring... it's the damn mask that i hate. i feel claustrophobic and feel like i can't breathe with it on. 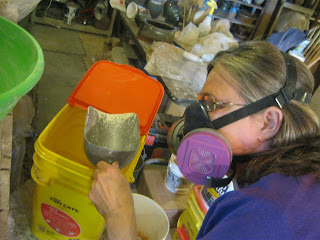 i mixed a large batch of shino along with 5 gallon pails of wheat and robins egg. we were firing the gas kiln the next day and we were able to test them to make sure i got it right 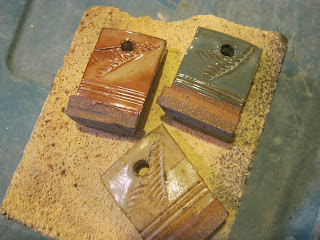 shino top left, robins egg on the right and wheat below.  the robins egg has a very small amount of chrome in it.  we were out of chrome so this test is without it. jeff borrowed some chrome from our neighbor Phil and we added it later (where else but seagrove can your borrow glaze materials from a neighbor?). we liked the tile without the chrome and we might just leave it out next time. 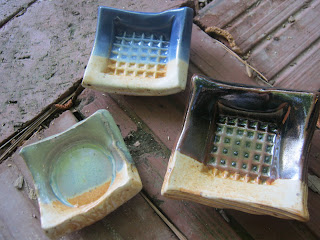 i had two buckets of glaze that john mixed some years back and i had never used them.  i decided to test them as well.  they were spodumene and a dark blue.  clockwise: spod and the blue, temnoku and spod and lastly, robins egg and spod.

the spodumene reminds of taking classes at NHIA.  i used LOTS of spodumene. there was a time when a lot of the glazes were either too thick or too thin. students weren't allowed to thin anything down. most times the buckets had already been stirred by the time i got to glazing at night so i couldn't pour off some of the water into an empty bucket if it was too thin. it seemed the spod was always safe. i can't tell you how many spodumene pots i made! oh the joys of making pots in a school setting. i do miss the exchange of idea and the social aspect but not all the "rules".
at May 10, 2011