it was Christmas 2007 and John was going through his first round of chemo at Dana-Farber in Boston. he was part of a clinical trial that included erbitux, along with 4 chemo drugs. the treatment made him so sick he spent 10 days in critical care. he came home the week before Christmas. needles to say, not much holiday shopping got done that year.
on Christmas morning John presented me with a turquoise necklace... he had called Gloria who owned the gallery where our pottery studio was located and asked her to make me something special. it was beautiful.

shortly before the move to North Carolina, i realized that i couldn't find the necklace. Jeff was certain that it was somewhere in the house and that it would turn up while we packed or once we unpacked. a year and a half went by and still no necklace.
i was heartbroken.
i looked in every handbag, suitcase pocket and backpack. no necklace. i came to terms that it was gone. maybe left in a hotel room during our multiple trips between north and south.

Jeff and i decided when we did the craft show in NH last month, that we would tent in the yard at our potter friends, Steve and Sue Russell. we pitched the tent together and i unrolled our sleeping bags. the tent has little storage pockets on the interior and as my hand brushed one of them i realized there was something inside. right away i knew what it was. 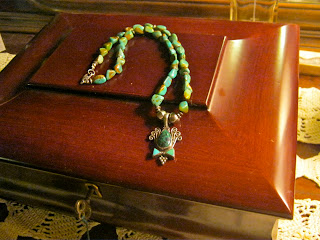 jeff and i had camped in Franconia Notch in the White Mts. before we moved south... i cried tears of joy when i found it.