I have had this form dancing around in my head for a few weeks now. Since we have been in a glazing cycle, I hadn't touched moist clay in over two weeks. This weekend I decided to throw some slabs and get started on this idea. 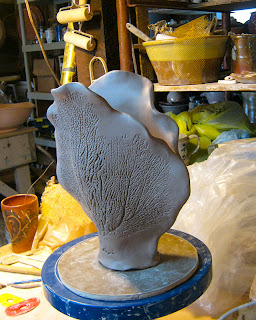 I have used sea fans in a number wall pieces as well as some dish forms. Often times they are raku fired and occasionally wood fired. My idea was to take two slabs and join them together to form a vase. 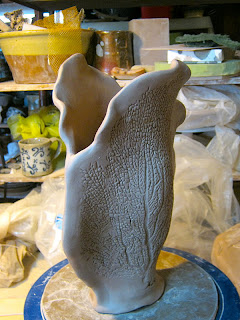 I like how it looks at this angle, when I see it from the front I think it is too wide. Another concern is it's stability. 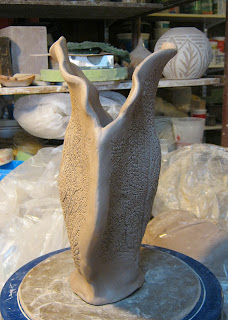 I am going to work on a few more next month and see where I can go with this form... for now Jeff and I need to make 50+ mugs & cappuccino cups for a coffee shop in Greensboro. The sure money stuff has to come first.
We also have a kiln to unload this afternoon... check back later for an update.
at January 30, 2012