Recovering from the weekend...

Celebration of Spring in Seagrove has come and gone and overall we were pleased with the weekend. The weather cooperated (for the most part) on Saturday and we were able to fire the raku kiln once. I use a bisqued plate to fire pendant tiles. This way the tongs can grab the edge of the plate, lift it out of the kiln, and be dropped into the reduction can. Unfortunately I used a plate that Jeff brought home from a neighboring pottery (I usually make my own)... neither one of us gave any thought to the fact that it may be made out of a clay body that can't take the quick firing of raku. The plate was on a pedestal shelf in the kiln, the edge cracked off and a few of the pendants fell onto some glaze tests below. When Jeff reached in to grab the plate more tiles fell off and onto the floor of the kiln. Long story short, the raku tongs BROKE, the other pair we have had broken some months ago and weren't fixed yet... we had to use fireplace tongs to remove the rest of the pieces. Shortly after cleaning up the disaster we had a huge downpour. It didn't last long but it helped us make the decision to not fire again. At least there were lots of people watching, who hopefully can now appreciate the work that goes into raku firing!
In between all this we were talking to customers and selling pots. One of our repeat customers brought us a gift... 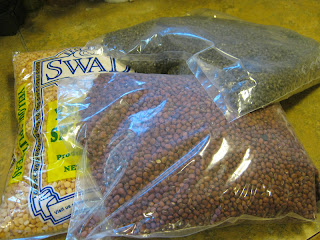 12 pounds of beans from the Indian Market near her home! Evidently the last time she was in, her and Jeff had a lengthy discussion about beans. She even brought us some large jars with labels to store them in! The ironic thing about this gift is that two weeks ago Jeff and I decided we were eating too much meat and that we were going to eat more plant based meals. We have a bunch of Moosewoods Restaurant cookbooks so I have been trying out some new recipes. Last night I made veggie burgers with a combination of black beans & pinto beans. 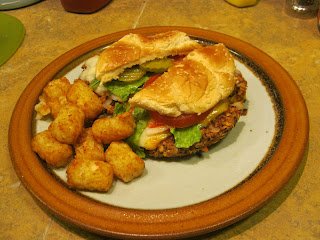 They were delicious and rather easy to make... and everything is better with tater tots!

Despite off and on rain all day yesterday, we had a steady stream of customers. The weather prevented us from firing the raku kiln and we were actually relieved. Jeff had been up late on Saturday, glazing pots and loading the gas kiln again. On Sunday morning he bricked up the door and starting firing once more. Yesterday afternoon I sent him off to bed for a nap and I took care of customers and the kiln. He leaves for S. Korea in two days and I thought he looked like he was needing a break. The kiln is loaded with an order going to Canada and tea bowls that he will take to Korea. I think I have only a couple of pots in there. The kiln was done at 11:30, which means we had a good nights sleep.
A desperately  needed, good nights sleep.