Jeff has been making stoneware coasters for years. We have been out of them for some time and decided that since they are good sellers we should take lots of them to the League of NH Craftsmen's show at the end of the month. I have never made them and this week Jeff showed me his technique. He doesn't use bats and I wasn't sure I was going to be able to get them off the wheel without distorting them but after watching him do a couple, I got the hang of it. Not using bats saves a lot of room when you have to make a hundred of something! 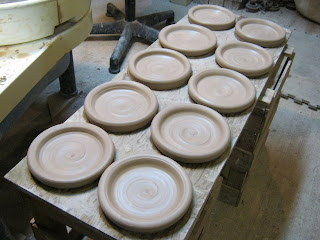 The league show is just Jeff's work, but I can do a certain percentage of the work. He is adding his  texture to most of these coasters. That is the time consuming part of the process. 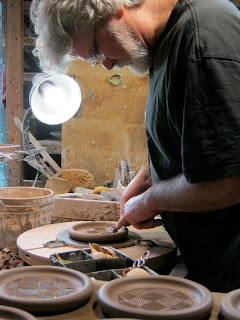 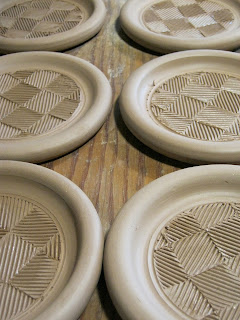 We will also keep some simple, with a swirl design in the center and many will be ready for our anniversary celebration on Saturday, July 20th.
...of course now I am thinking, wouldn't it be cool if I slipped some of these and carved some leaves and flowers into the surface?
at July 11, 2013