What a week it has been! We had a load of pots that needed to be glazed and fired. Despite some horrendous weather, Jeff and I managed to get it done. My other task for the week was creating daily social media posts about the Spring studio tour for our local potters group. Now this should have been an easy task, since I have been on this committee for seven years. Wouldn't you know that my aging MacBook Pro decided to start acting up. It's been slowing down for some time now and this week it became a snail. At one point it took me an hour to create a post, find the photo, and upload it. After spending hours on end making changes to try and speed it up, I came to the conclusion that I needed a new laptop BEFORE it totally crashed and burned (been there done that).
I REALLY wanted another MacBook. My bank account said, "In your Dreams". I searched for a refurbished Mac but they were either just a little newer than my 2009 or still way out of my budget.
Jeff found a good price on an HP, that had what I needed and was within the budget.  So here I am trying to adjust to Windows 10 and a new keyboard layout. It will take some time... but I will survive. 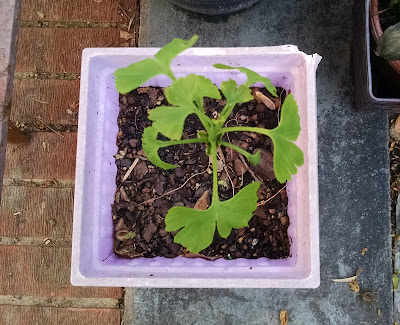 The good news is that my baby ginkgo tree survived the winter and has leafed out. The lawn has been mowed for the first time. We unloaded the kiln and it was great firing!
at April 09, 2017