January 6th and I am just getting around to my first post for 2018. I think I have expended most of my energy trying to keep warm. Jeff and I have taken this slow time of year to finish the drywall in the studio and get it painted. I will leave that story for it's own post later in the month. Today I am going to talk about kitchen gadgets, not pottery. Although there will be a photo of one of my favorite bowls at the end.
Everyone on Facebook has been talking about the Instant Pot (IP). Even the NY Times food writer Melissa Clark wrote about it. In case you have somehow missed it, it's an electronic pressure cooker that can also be used as a slow cooker. There is a saute feature that allows you to saute your veggies or brown meats before using the pressure cooker or slow cooker functions.

Last fall I REALLY wanted one.
When Amazon had a one day special on them, I ALMOST bought one.

Jeff and I always discuss purchases, especially if they are close to or over, $100. He asked me if I "needed it" or just "wanted it." He mentioned that I already own a stove top pressure cooker and a slow cooker. It was definitely a "want." I really didn't want to find a place to store it either. Instead I decided that I should try to utilize my stove top cooker more often. For the past 30 years I have really only used it for veggies. Mostly green beans, winter squash, rutabaga & carrots.

Last night I decided to try an IP recipe for a creamy wild rice chicken soup, that was shared on Facebook, in my stove top pressure cooker. 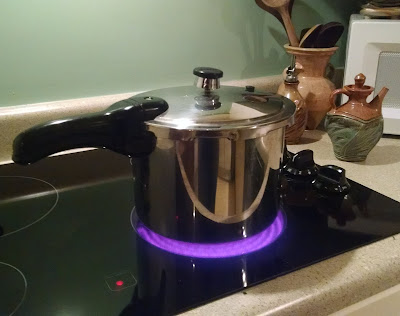 I used the same cooking time and pressure reducing method that the recipe stated and the only thing I would change next time, is to cut my carrots bigger, because we like them a little firmer. 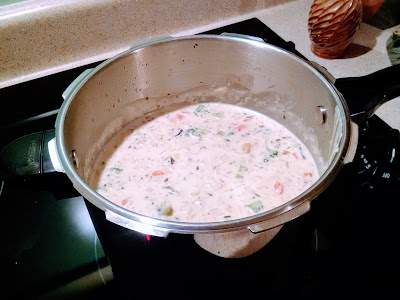 Once the vegetables, rice, chicken and chicken stock, have been cooked under pressure, the pot goes back on the stove and the milk/cream is added. 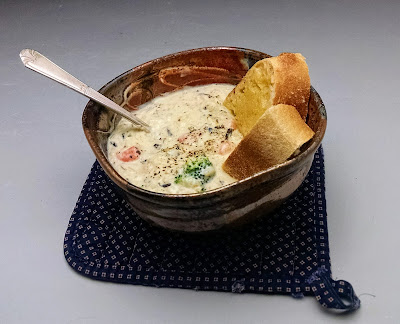 Served with a crusty bread on very cold night, it was a delicious and quick meal! I am now going to search for other recipes to try. I know that some people are afraid of pressure cookers, but they are have a relief valve now, eliminating the potential for it to blow up like your grandmother's pressure cooker. I have had this one for more than 20 years, and have occasionally replaced the seals and more recently the "rocker" valve on the top. Parts are available online and are relatively inexpensive.

I welcome comments from anyone with an IP or an old style pressure cooker. I would love to hear about your experiences or favorite recipes.