a lesson in glaze mixing

i had never mixed glazes on my own before...it was something that john always took care of. i often helped, but that meant doing the screening, not the measuring/weighing/calculating part. yesterday i realized i was running out of my Temple white glaze...it was time to take the plunge and mix up a new batch! jeff was there to help my with the math (i admit to being a math dummy) and show me how to use the scale. it was a good glaze recipe to start with because it is very simple...in no time at all i had a 5 gallon pail mixed and screened. i have one porcelain bowl that i will use as a test in this firing 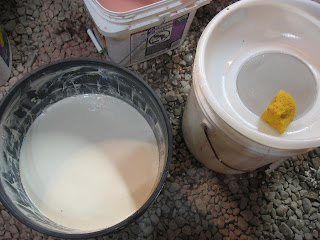 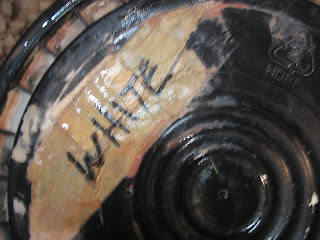 ...back to the studio today to get more glazing done. jeff's friend rob from virginia (also a potter) is visiting...so tonight we are taking a break and heading to the dolphin striker in portsmouth for drinks and music....Truffle is playing!!!
at November 25, 2009