another revelation about Southern cooking

last night i learned something new... country gravy is just a thick white sauce. i had no idea. i knew it was a milk based gravy but i figured there was something else that was added to it! i made this amazing discovery  because i purchased an envelope of country gravy mix and made it last night to go with mashed potatoes. when i tasted it i realized that i didn't need to purchase a mix, it would have been simple enough to make from scratch.
during lent, on no meat fridays, my mom used to make a thick white sauce that was served over mashed potatoes with sliced hard boiled eggs. i know it doesn't sound very appetizing, but it was always one of my favorites.
not having had it in probably 30 years, i decided to hard boil an egg today and have it with the leftover mashed potatoes and "country gravy".  it was a yummy brunch and my little Ron Philbeck bowl made it taste all the better... 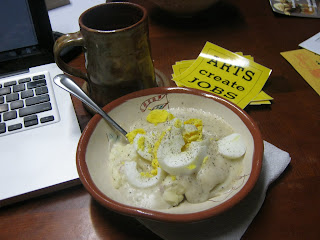