I have had nothing to blog about these days. I guess I haven't wanted to bore you with the mundane. The CCM Pottery Festival in Charlotte was good... easy set up, short day (10am-4pm), and fabulous customers who love to buy pottery. When you figure in the time and dollars we put into this show we make more money per hour than any other show we do. This show also attracts a smart crowd that understands art and handmade. We sold lots of sponge holders and coasters (as usual) and things in the $50 to $95 range were selling as well.

The sponge holders are about gone and the good thing is, I can throw those forms without putting too much stress on my shoulder. They are a good exercise in getting back to work! 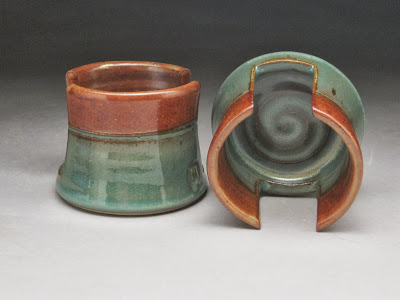 I think I have the warping issue pretty much solved. They need to be thrown fairly hefty. A few still warp slightly, but not enough to be called a second or get the hammer. 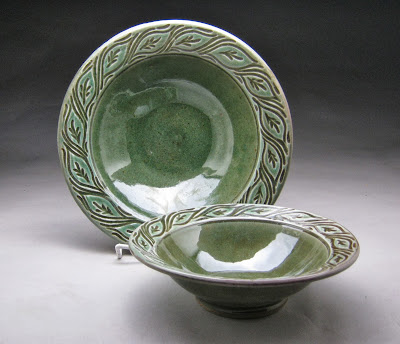 I am having some issues with peeling slip on these flared rim bowls. The slip peeled off the rim on a few of these. I have two thoughts on the issue. The first is that I should keep the slip off of the edge of the rim and second, I am at the bottom of my slip bucket and I think it's beyond it's shelf life. I have heard other potters say that slip doesn't keep. The last batch I made was large so it's been around a few months. I also had a couple of vases with some slip that popped off the sides. It's time to mix a new batch and I think I will make half as much. If anyone else has had this experience, I would be happy to hear your thoughts.
at October 16, 2013